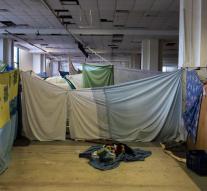 athens - The Greek police began Friday to dismantle a refugee camp in Hellenikon, the former Athens airport. Most people leave for a shelter in Thebe in the middle of the country.

Human rights organizations have previously called the living conditions in the camp. Last summer, too many people were packed in tents in the soothing heat. There was also too little food and there was a lot of crime and violence.

Many migrants in the camp, including Afghans, are not eligible for admission in a country of the European Union. In the autumn, the authorities started transferring migrants to other shelters, including the Greek-Macedonian border. The approximately five hundred last refugees must also leave.