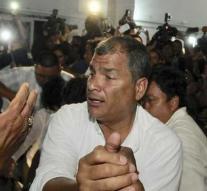 quito - Ecuadorians have determined by a referendum on Sunday that the president can only stay in office for two terms. This in particular prevents a return of former President Rafael Correa.

The referendum was created by the current left-wing President Lenín Moreno Garcés in order to reverse a measure taken by his predecessor. Correa had ensured through the Congress in 2015 that presidents can make themselves eligible for unlimited re-election.

'The old politicians will not return', Moreno said on television after it became known that some 64 percent of the votes were for a limit of two terms of office, and the official results will be announced.

Correa led Ecuador between 2007 and 2017. He put his former vice president Moreno forward as presidential candidate in the elections last year. But the two then got in onmin.