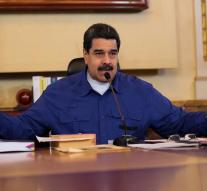 caracas - Venezuela gets a referendum that allows citizens to vote on the new constitution that President Nicolas Maduro wants to introduce.

That has announced Maduro on Thursday. Maduro's plans to have the current constitution rewritten by a specially-called civil council, cause a lot of unrest in the country. According to opponents, he gains more power through that amendment. There have been weeks of riots and protests. There is also criticism from his own government.

'The new constitution can be judged in a referendum so people can tell if they agree with me,' said the president.

A date for the referendum is not yet planned.