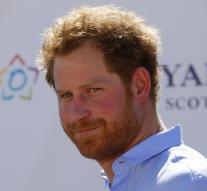 london - The 37-year-old man who was preparing an assassination attempt on the British Prince Charles because he hopes that Prince Harry is king, being trapped indefinitely in a mental hospital.

Mark Colborne is held under the Mental Health Act, a law that stipulates that people can be detained and treated with a mental disorder, British media report.

The 'red-haired extremist 'found that people be penalized with a red hair color and therefore wanted to arrange that also redhead Prince Harry came to the throne.

He cited chemicals and tools in-house to create cyanide. He fell by the wayside when his half-brother saw the stuff. In his diary he described how he would carry out attacks on dauphin Charles and Harry's elder brother William and he compared himself with Anders Breivik.

In early June Colborne was convicted of preparing the attack.