Home / World / Recovering last part Raqqa on IS from start 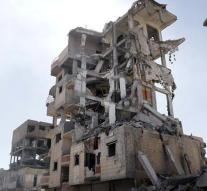 raqqa - The alliance of Kurdish and Arab armed forces begins Sunday evening with the rebuilding of the last part of the Syrian city of Raqqa on Islamic Islamic Territory Organization (IS). For many years, the city was the most important city under the control of IS.

More than 80 percent of the city is already in the hands of the alliance supported in its struggle by the US. The revival of Raqqa would mean that IS is nowhere else a major bulwark. The alliance of Kurdish and Arab militia, calling Syrian Democratic Armed Forces (SDF), opened the attack on Raqqa in June.

Raqqa was the capital of their 'caliphate' for the Sunni extremists of IS. IS and other fighting groups fighting against the government of President Assad took the city in March 2013. Since early 2014, the city was only owned by IS.