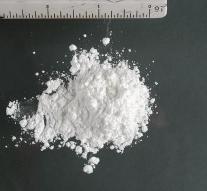 paramaribo - The Surinam police burned a record amount of 1751 kilograms of drugs on Tuesday morning. The cocaine was found last Friday at the port of Paramaribo.

The drugs were in 49 sports bags that were hidden in different containers with wood blocks. The drug's destination is unknown, police report Tuesday. On Friday, the police reported that the drugs had Belgium as their destination.

The police have not arrested anyone. According to a police spokesman, it is important to 'be careful' in the investigation and possible arrests.

For a few weeks, Surinamese customs carry out a 100 percent check in the port. The Minister of Finance, responsible for customs, has commissioned it. If there was a random check, now all containers leaving the port are checked.

The reason for this sharpening is the increasing number of drug trafficking in Europe, in which Suriname appears to be the port of transit.