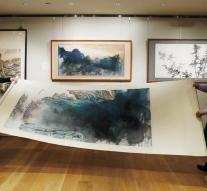 - A painting by the Chinese painter Zhang Daqian Tuesday at a Sotheby's auction in Hong Kong raised a record amount equivalent to 27 million euros. Zhang painted Peach Blossom Spring in 1982.

The buyer of the landscape is a museum in Shanghai. Zhang Daqian (1899-1983) is widely regarded as the best Chinese painters of the twentieth century. Around the sixties he painted both modern impressionist and expressionist canvases. He even had a special gift: he is known as one of the best forgers of ancient Chinese painting, according to the South China Morning Post.