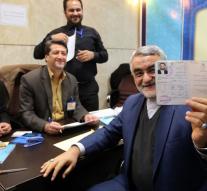 tehran - A record number of nearly 12,000 people will participate in Iran as a candidate in elections to the national parliament. This was reported by Iranian state television Saturday. The Iranian parliament has 290 seats.

It is expected that the majority of candidates for the elections on February 26 already have fallen. The so-called Guardian Council, a judicial body, namely the candidates will first stop light before they get on a call list. In the last elections in 2012, the board 1800 candidates out of the 5200 who reported themselves.

To get on the ballot, candidates must include a certain level of education and endorse the principles of the Islamic state.