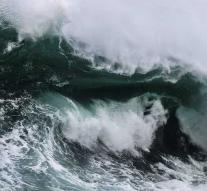 wellington - Scientists believe that the largest wave has ever been established in the southern hemisphere. A solar buoy registered a wall of 23.8 meters high water during a flying storm near Campbell Island, some 700 kilometers south of New Zealand.

According to oceanographer Tom Durrant of MetOcean Solutions, a wave of 22.09 meters was measured in Australian waters in 2012. Elsewhere in the world, higher monsters have been admired and even tamed on a surfboard. The Brazilian Rodrigo Koxa recently established a world record at the famous Nazaré surf break off the coast of Portugal. The giant he 'rode' was 24.38 meters.

According to the Smithsonian magazine, the highest wave ever was measured in Lituya Bay (Alaska) in 1958: 30.5 meters. That was a tsunami as a result of an earthquake.