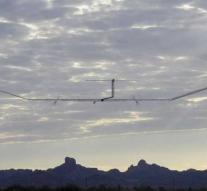 munich - A new type of aircraft from Airbus has established a record. The aircraft Zephyr S HAPS, which runs on solar energy, rose on July 11 and landed only after 25 days, 23 hours and 57 minutes of continuous flying. It was the first flight of the plane.

The Zephyr S flies at a height of 21 kilometers, twice as high as ordinary passenger planes. The intention is that he will provide internet connections on the ground there, as a kind of flying router. The device can also recognize forest fires and oil leaks. The first customer is the British Ministry of Defense. Airbus calls the aircraft a pseudo-satellite. The device weighs only 75 kilos and is about 25 meters wide at the wings. There are solar cells on the surface.

The old record was also in the hands of Airbus. A forerunner of the Zephyr S stayed in the air for fourteen days in 2010.