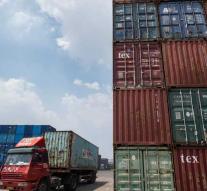 ghent - A record load of almost two tons of cocaine has been discovered in the port of Ghent. According to the federal judicial police of East Flanders, the drugs have a street value of 100 million euros.

The cocaine was found Tuesday between a cargo of tiles from Brazil. They were hidden in three containers with 1. 900 packages. The investigation into the case is still ongoing.

Recently, the EU drugs agency (EMCDDA) announced that cocaine is increasingly being smuggled into the EU via northern container ports. According to the agency, the Belgian ports are increasingly important. Almost half of all cocaine seizures in Europe are done there.