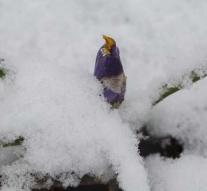 atlanta - In the mid-west of the United States, a record amount of snow fell on Sunday and extremely low temperatures were measured. In addition, the eastern part of the US suffered from tornadoes.

Most of the snow fell in the states of Wisconsin and Minnesota. There fell between 50 and 60 centimeters, which was a record in many places.

In the state of Michigan, about 46 centimeters of snow fell and around 310,000 households were without power. The expectation is that in many cases the power will not be back until Tuesday.

At the same time, a large part of the US suffered from strong winds and sometimes even tornadoes. In North Carolina a motorcyclist was killed because he was hit by a tree that had been released by the wind.

The wind, together with the snow and ice formation, caused major problems for electricity companies and airports. On Sunday, 1804 flights have been canceled due to weather conditions.