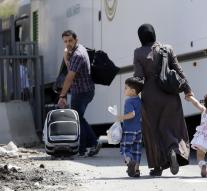 ottawa - Canada did not succeed to take before the end of the year, the previously promised 25 000 Syrian refugees. Premier Justin Trudeau said Tuesday at the Canadian CBC News. According to him, as many as 25,000 captured, but is done partly in 2016. Trudeau argues that it is important that " done right " than the time when that happens.

The inclusion of 25 000 Syrians was an election promise of Trudeau who was sworn in early November. Under the reign of predecessor Stephen Harper, Canada was planning to take 10 000 refugees from Syria in 2018.

According to the BBC welcomes Canada until the end of this year 10 000 Syrians. The rest must be collected for late February.