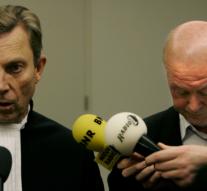 amsterdam - The Board of Discipline Advocate Cees Korvinus reprimanded for a financial agreement with Ad Bos. He was the whistleblower of the building fraud affair in his case against the Dutch state. Korvinus had negotiated a share of the damages and had to return his working hours and associated activities are not administered.

According to the board of discipline, however, this is contrary to the prohibition of performance-related pay for lawyers. Forest claimed many years struggle against the Dutch state. In 2009, he received compensation of 1.7 million euros. Korvinus had agreed that he received 10 percent of that amount.

The lawyer argued in its defense that the appointment was made at the request of Forest. The Council considers it unlikely and Korvinus should reject the offer as 'befits a decent lawyer.