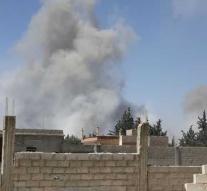 beirut - The Syrian rebel group Jaish al-Islam accused government troops on Saturday of throwing a bomb with poisonous chemicals on civilians in Douma, the last rebel city in East Ghouta. In addition, more than five hundred people would have been injured.

'The regime of Assad and his allies continues their crimes,' says the military spokesman for the rebels Hamza Birqdar on al-Hadath TV The Syrian Observatory for Human Rights, a war monitor in Great Britain, claims that there are eleven cases of suffocation phenomena are known in the city, including five children, after attacks by Syrian fighter planes.

It has not been said which chemicals have been used in the attacks. Neither the rebel group nor the Observatory spoke of fatalities. Syrian state media denied that chemical attacks have been carried out.