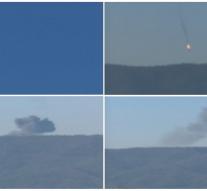 - A rebel group in northeastern Syria has spread images on the internet of a Russian pilot who was apparently killed. The displayed relics, according to the group, which calls itself Tenth Brigade, one of the pilots of the downed Russian SU24 Tuesday.

About the crash of the fighter doing different readings of the round. According to Turkey, the plane violated Turkish airspace and was shot down after repeated warnings by two F- 16s of the Turkish Air Force. The Russian Defense Ministry says that the plane flew just above Syria and that there from the ground is torn down.

According to Turkish media, the other pilot in the hands of Turkmen- Syrian rebels.