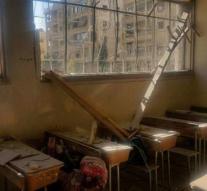 - Syrian rebels on Sunday in the west of Aleppo, which is controlled by government forces, a school bombarded with grenades. Therefore, seven children were killed. This was announced by the Observatory for Human Rights.

Syrian state television reported ten dead, including students from the Saria Hasoun school in the district of al-Farqan.

In the eastern part of the city, where the insurgents to the departure of President Assad needs the shots, professional medical care has become virtually impossible. The last still operating hospitals have become so badly damaged by the ongoing bombardments, they can be used not count since Saturday. Moreover, the air attacks by Syrian and Russian jets have made many victims.