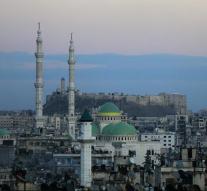 aleppo - Syrian government forces in the east of Aleppo occupied a large part of the territory formerly held by the rebels. The insurgents have, according to the Syrian Observatory for Human Rights meanwhile 60 percent of their former territory lost in the city.

The army captured Friday another district on the insurgents. Parts of Aleppo which are still held by the rebels, arrived Saturday again under fire. A witness in the west of the city saw seven plumes of smoke over the rebel region. Also warplanes were heard.

According to the Observatory, at least three people were killed in an air raid. Local rescuers spoke of at least six deaths. An air strike would have taken a group of displaced people. The government army denies shelling civilians.