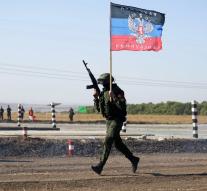 The withdrawal of weaponry is part of an agreement signed in February in Minsk. The so-called Minsk II should lead to a peace in Ukraine. The withdrawal follows a cease-fire which is largely respected.

The Ukrainian army is also engaged in the recovery of heavy weapons from the front. It was agreed that all weapons be withdrawn with a caliber up to 100 millimeters. The weaponry should be at least 15 kilometers from the front.