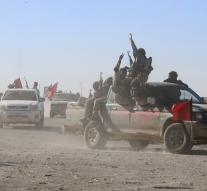 damascus - Syrian rebels in the northwest of the country a Russian helicopter fired. According to the Syrian Observatory for Human Rights, the device must then make an emergency landing in an area controlled by the regime of President Bashar al- Assad. Since the appliance caught fire.

The helicopter was near the border with Turkey by anti-tank guns were taken under fire. It is not known whether there are casualties.