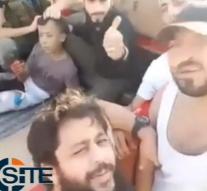 damascus - Warriors have a rebel group in the northern Syrian city of Aleppo decapitated a boy and filmed the act. The supporters of the militia Nur al-Din al-Senki accuse fought their victim for a pro-Palestinian group, reported the Syrian Observatory for Human Rights Wednesday.

The leadership of the rebel group Nur al-Din al-Senki, supported in the past by the US, distanced himself from the atrocity and announced an investigation.

On the Internet to circulate two shocking videos showing the bloody deed. Then we see how a man beheads the boy on the tailgate of a pickup truck. Other fighters of the militia laugh. The pro-Palestinian group Liwa al-Kuds said the victim was a twelve-year-old Palestinian. He was not a warrior, but a sick child from a poor family, according to the group.