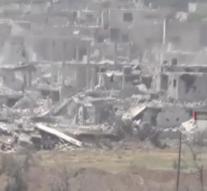 amman - More than two thousand rebels and their families left Qaboun, a suburb of the Syrian capital, Damascus on Sunday. That has reported Syrian state media. The exodus follows two months of air attacks and artillery shoots.

The rebels agreed on Sunday on Saturday to a secret agreement that offered them the opportunity for a retreat. After more than two months of bombing, the city has little more left over. 'The regime has threatened to make Qaboun equal to the ground,' said a member of local authorities.

According to Syrian state media, 2289 people left Qaboun. They have been pulled to Idlib province, where the rebels are still in power. The warriors against the regime of President Assad hold it on just over 1500 people.