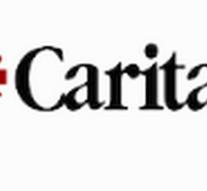 - Three employees of the aid organization Caritas abducted Tuesday by rebels in eastern Congo. A German journalist was injured in the robbery and subsequent kidnapping, reports Caritas.

Two cars of the Roman Catholic aid organization drove into an ambush by suspected Rwandan rebels. The second car could escape despite a hail of bullets, but the occupants of the first were trapped and were carried away. It is a German spokesperson, a local assistant and a driver.

The peacekeeping force is stationed has put launch a search for the missing aid workers in eastern Congo.