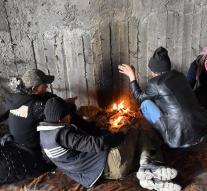 - The rebels districts in the east of the city of Aleppo ruled, have lost 90 percent of their area. The observers reported the Syrian Observatory for Human Rights Monday. The Syrian armed forces indicated that they practically all over the city have been handed after heavy shelling of the besieged areas Monday.

Government forces have including Russian air support eastern Aleppo continued their advance in districts east of Aleppo. The Russian Defense Ministry reported that the entire city is now 95 percent controlled by the government forces of President Bashar al-Assad. The Ministry speaks of the liberation of the district where 100 000 people have fled from. In surrendered almost eight hundred rebels in the past 24 hours, according to Russian media.