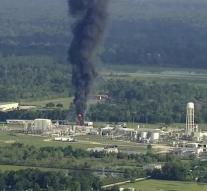 houston - At a chemical plant near Houston there has been a fire again. CNN images show how flames and black smoke come from one of the buildings. In the same factory, explosions were already in existence.

The explosions were caused by the fact that the cooling had fallen out after Hurricane Harvey had caused floods, and thus the power went out. Several agents then checked for inhalation of toxic fumes.

The French chemistry company Arkema already indicated that the danger had not gone away. The new fire also has the same cause. The US authorities have decided to burn the fire and not endanger firefighters.

The factory is located in Crosby, 40 kilometers northeast of Houston. At the factory, organic peroxides are made which are used in the production of synthetic resin, polystyrene and paint.

The smoke is irritating to skin, eyes and lungs, but long-term effects would be limited, according to the chemist. Residents in a 2.4 kilometer radius have been evacuated.