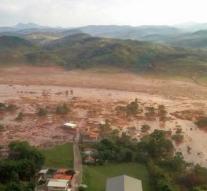 - A levee breach has in the Brazilian state of Minas Gerais created a huge mess. According to Brazilian media by mud flows certainly Seventeen people have been killed, but authorities have not yet confirmed. Dozens of people were still missing.

The levee breach at an iron ore mine were dozens of houses have been destroyed in the village of Bento Rodrigues. The authorities told us to evacuate about six hundred people from the town to higher ground. Even residents of the place Paracatu de Baixo be brought to safety.

According to Brazilian media broke a dam wall of a reservoir with water from the mine, which is owned by mining company Samarco. That left a statement that is still unclear why the dam collapsed. The company is a joint venture between Vale and BHP Billiton.