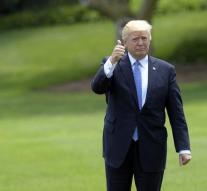 It is the lowest rating for the president since he was in January this year. The figures come after a rewarding week for Trump and the White House. The continuing concern about investigations into the alleged Russian interference in the US presidential elections is the main cause for the figures.

The sudden forced departure of FBI director James Comey and the sharing of state secrets with Russian officials can count on little understanding among the Americans. Only in his own party, the Republicans, Trump is still popular. Only 23 percent rejects its policy. Last week it was 16 percent.