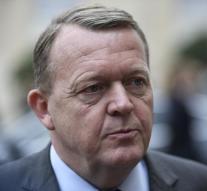 copenhagen - Danish Prime Minister Lars Løkke Rasmussen has two likeminded parties to come to reinforce his government. He did in advance of negotiations on reforms. Which could turn out just to early elections.

Rasmussen leads a minority government after the coalition failed since last year. His liberal party Venstre has in parliament only 34 of the 179 seats. For political decision-making is constantly seeking parliamentary support. Which was only promised at the outset by the radical-right People's Party.

' In my opinion it's a good thing the Liberal Alliance and ask the Conservatives to join our government, '' Rasmussen said Saturday during the annual party congress.