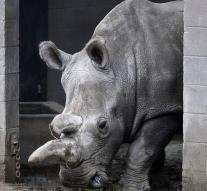 - A rare white rhinoceros has died Sunday at a zoo in the US city of San Diego. The 41-year old Nola would be one of the last five northern white rhino in the world. The zoo has had to sleep in the animal because it was getting worse with her ​​health, local media reported.

Earlier this year, the rhino underwent surgery on her hip. The beast had long been suffering from various ailments such as tumors and infections. Nola had since 1989 at the zoo in San Diego. In December, died in the same park a 44-year-old northern white rhino from cancer.