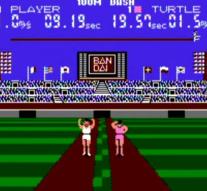 washington - A rare game for the Nintendo Entertainment System has been sold. An unknown buyer paid just $ 42,000 (converted over 36,000 euros) for Stadium Events from 1986. The game is still in the packaging.

The owner confirms the sale against gamesite Kotaku. He tried to sell the game first through eBay, but the intended buyer did not pay at all, so the deal did not go on.

Stadium Events was an athletics game, in which the players had to move on a special mat. They could join the 100 meters, the 110 meter hurdles, jump and jump jumpers. There are about 200 copies of the game sold.