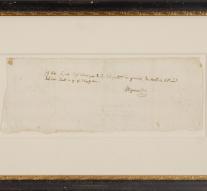 boston - In the US city of Boston is auctioning a rare letter written by the composer Wolfgang Amadeus Mozart wrote to a friend , the botanist Nikolaus Joseph von Jacquin . The document released converted 190 000 euros.

The letter asks Mozart or von Jacquin wants to send him three scores . The letter probably dates from July or August 1786.

The document was bought by " a music collector on the East Coast, for whom it is a jewel in his collection ", is all about the auction house wanted to lose.