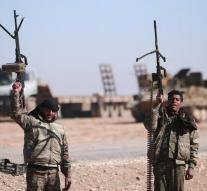 hukoumiya - The Syrian Democratic Armed Forces (SDF) have attacked the IS Raqqa IS in northern Syria from three sides. A spokesman reported Tuesday that the attacks started Monday, from east, west and north.

Islamic State considers Raqqa as the capital of the so-called caliphate. The SDF therefore expects strong resistance. 'They will fight for their so-called capital,' said the spokesman.

IS took over the city from rebels in 2014 and used Raqqa as a base for terror attacks in the West. The SDF, in which the Kurdish YPG and Syrian rebels cooperate, receive support from the US-led coalition at the Raqqa siege.