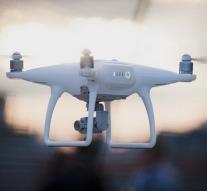 - "The use of raptors to intercept drones seems a matter of time. Eagles are trained to the flying aircraft, often equipped with cameras to see if prey. They grab them from the air and fly it for a quiet place on the ground."

",, The first birds of prey have now passed their exams and may be used, '' Dennis Janus says police Sunday. The birds where the police now are flying, of a private organization. Of those birds police uses trained to own birds.,, The police have purchased chickens from the bald eagle. This own culture can go hunting drones from next summer. Police also leads bird guides. ''"

"Attackers can use drones for example, to disrupt public order or even use them in an attack.,, Think of events where many people come to. Also in palaces, official receptions and around airports drones are not allowed. ''"

"Criminals and terrorists can also use drones. During a training exercise Monday on a training location in Ossendrecht, a real threat of a VIP (very important person) imitated. A raptor must make a drone harmless while security guards take care of the target."