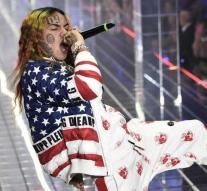 new york - Tekashi69 does not have to go to jail. The rapper has a probation period of four years, of which one year conditionally. He did, however, have received a thousand hours of community service, reports TMZ.

Daniel Hernandez, also known by his other artist name 6ix9ine, admitted in 2015 that he had been guilty of making a spicy video with a minor. The rapper and a buddy made and distributed three videos in which a thirteen-year-old girl was naked to see. Hernandez, who said in an interview last year that he had not had sex with the girl, made a settlement with the law. The rapper then received a conditional prison sentence of three years.