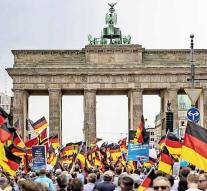 hamburg - Once again, a failed asylum seeker raped a young German girl. The anger in some of our eastern neighbors about criminal foreigners is increasing.

Last weekend, 30-year-old, badly assaulted perpetrator Mansor S. lured a 14-year-old girl to a portico at the Central Station in Hamburg and raped her there. The victim, albeit traumatized, could flee and get help. The perpetrator was caught in the collar.

S. arrived in the Federal Republic seven years ago and then committed a long series of crimes. Within a year he was convicted for the first time, because of abuse. Already in 2013 the man had to leave the country, but he did not go, just like half a million other exhausted asylum seekers who still reside in Germany.

There is hardly any migration to Afghanistan because of the tense security situation in the country. For example, unwanted persons like Mansor S. could stay in Germany for a long time. Only in recent months asylum seekers who have exhausted all legal remedies have been flown to Kabul, where there would now be less threat.

The German justice and asylum system appears to consistently prevent expulsion. The public prosecutor wanted to keep S., because there is still a higher appeal. Recently, a 20-year-old asylum seeker from Iraqi Kurdistan was flown back to Germany to appear in court for the murder of the Jewish girl Susanna (14). And the bodyguard of Osama bin Laden, who has been evicted for years, must return from Tunisia to Germany, the court finds.

Meanwhile, in East German cities such as Dresden and Cottbus, there are regular demonstrations of angry citizens who speak out against migration and refugees. Matters such as those of Mansor S. confirm their positions.