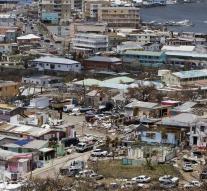 philipsburg - Rampenfighter Rob McNamara of the Canadian rescue organization Global Medic is deeply impressed with the devastation on St. Maarten. The rescue worker visits every possible natural tragedy in the world, but the dramatic effect of hurricane Irma is causing few disasters.

'Regarding death, maybe, but if you look at the destruction that this hurricane has left behind on this island, it's high on the list of what we've ever experienced,' says the retired fireman from Canada.

Because the tap water supply has been broken by the storm, Global Medic takes care of drinking water in the hospital. 'We can pack pool water, edit it, and then you can drink it. 'She also helps the Dutch army with drones to chart the damage.

Previous operations for Global Medic brought McNamara, among others, Sri Lanka. 'There a mudflow swells a complete village. Only a few pieces of roof saw you stuck over it. It claimed more than one hundred deadly victims. 'Colleagues from his four-legged team just returned from Haiti who also got a hurricane.

'The difference between St. Maarten and Haiti,' says McNamara, behind him three huge light masts around a sports field that have been knocked around like lucifer sticks- is that this is the first world. The construction takes many months, but it goes much faster than in a poor country. '

The low death rate on St. Maarten is perhaps what makes him most surprised. Certainly, all the ravages, from wrecked boats and containers to even lorries spun on their side. 'We need to do some more searches, so there is a chance that we will encounter more victims. '