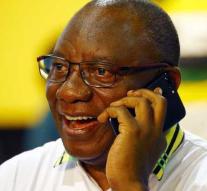 It is expected that Ramaphosa will take the oath on Thursday afternoon. He holds the position for the time being until 2019, when presidential elections are held.

On Wednesday, President Jacob Zuma (75) reluctantly announced his resignation. He did this under pressure from his party, after he had been discredited due to a series of corruption suspicions. He thus prevented him from clearing the field with a vote of no confidence.

In the South African press it is mainly about the feeling of relief that prevails in the country after the resignation of Zuma. 'The long nightmare is finally over', headlined news site Daily Maverick.