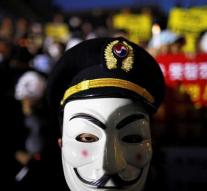 seoul - Hundreds of Korean Air Lines Co. employees have demonstrated in Seoul against the family that is actually at the head of the airline. Daughters of the CEO were repeatedly discredited for misconduct, such as turning a plane over because of a conflict about the way nuts were served.

Some 500 staff members, former employees and sympathizers went out on the streets, reports state press agency Yonhap. Many demonstrators in Korean Air uniforms wore masks or sunglasses to prevent them from being recognized. They chanted slogans as 'the Cho family must be removed from management. '

Korean Air announced last month that two daughters from top man Cho Yang-ho are leaving. They had high positions within the company. Cho also apologized for the unrest around his family. One of his daughters became discredited by the so-called 'nutjesrel', her sister would have gone through the ribbon during a meeting.

According to Yonhap, it is very unusual for employees of a so-called chaebol, a large conglomerate, to demonstrate against their boss and the family pulling the strings.