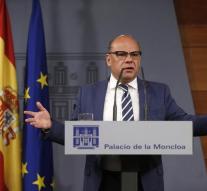 - The outgoing Spanish Prime Minister Mariano Rajoy again attempts to form a government. In late June he managed it yet, because both the Social Democrats of the PSOE as liberals Ciudadanos refused aid.

Rajoy is talking with other candidates. He spoke Tuesday in Madrid with representatives of the Canarian Coalition. That party with a seat, is willing to cooperate with the conservative Popular Party of Rajoy, provided that party water to compromise.

It is still unclear when the two sides talk. Incidentally, Rajoy will have other parties must draw the line in order to achieve a majority. However, there are few options. The radical left Podemos, the only other candidate, but such coaltie is unthinkable. PP itself has only 137 of the 350 seats in parliament. So the chances are that the talks fail and there will have to be a leftist coalition without the PP.