Home / World / Rajoy does not know anything about corrupt network 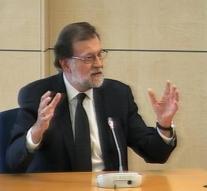 madrid - Spanish Prime Minister Mariano Rajoy stressed Wednesday in a court hearing not to know anything about tampering with money by party mates. Rajoy has witnessed a trial on large-scale corruption and fraud in the regions of Madrid and Valencia, where members of his People's Party (PP) would have been involved. The PP campaign box would have benefited from the creation of malversations.

Rajoy said outraged to know nothing about such practices and wondered if there was no wrong witness. The Spanish Prime Minister is nowhere to be suspected or accused.

In the affair that rolled in 2007, businessmen and ex-members of the PP are accused of abuse of power, corruption, tax evasion and money laundering. Many smuggling would be paid to local drivers for building permits or government assignments.