Home / World / Rajoy can by as Prime Minister of Spain 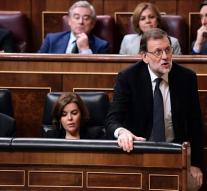 - Mariano Rajoy to continue as prime minister of Spain. During a vote in the Spanish parliament Saturday were more members than against Rajoy. This seems to be coming to an end an impasse in the Spanish government formation that lasted for ten months.

Rajoy's conservative People's Party (PP) lost the last elections but remained the largest party. Rajoy, however, saw no chance of forging a coalition because the Socialists of the PSOE did not want the sea to him. After the leader of the PSOE was forced to resign by his party, the way was clear for a new government under Rajoy.