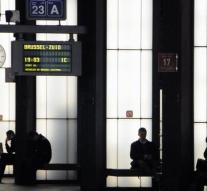 brussels - Trainers who want to go to Belgium must take serious delays due to a 24-hour strike on Tuesday. The Belgian railways warn of severe disturbances from Monday 22:00. The high-speed train, Thalys, tries to keep the timetable as normal as possible, but also takes into account nuisance.

In protest against the 'right-wing' government policy, members of the socialist union ACOD put down work in many sectors. 'The government spends more than 4 billion on corporate cars annually and saves 3 billion in railways,' said the federation.

Public transport in most of the major cities in Belgium is also affected, and in some cases it is completely eliminated. The postal services and public services will also suffer from the strike. There is a great chance that the police will be deployed to take over the work of striking cops.

The schools are functioning normally. Actions were announced at the public broadcasting and telecom company Proximus.