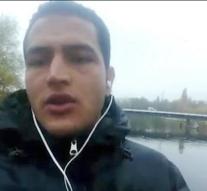 rome - Italian police Wednesday made two raids linked to the suspected perpetrator of the attack in Berlin, Anis Amri. The police said the actions were part of research in radical Islamic circles.

The raids were Aprilia, south of Rome, according to Italian media. Amri, who drove crowded Christmas market on December 19 with a truck and killed twelve people together, had become radicalized in prison in Italy. He was four years for arson, assault, threats and vandalism.