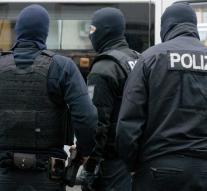 berlin - The police in Berlin on Tuesday early in a mosque invaded because of terrorist suspicions.

It is the al-Sahaba mosque in the Wedding district in the north of the German capital. According to German media there were also raids in other places.

The mosque is a meeting point of salafists. The 45-year-old imam is suspected of sending money to a man in Syria to finance attacks.