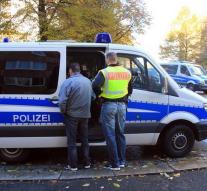 dresden - Special units of the German police on Wednesday in raids in several places made shelters for asylum seekers. The action in place in the states of Saxony, Thuringia and Rhineland-Palatinate was directed against a group of Chechens.

The prosecution suspects sixteen Chechens of membership of a criminal gang, said prosecutor in Dresden. They would have been guilty of extortion, threats and deprivation of liberty. Because the suspects are considered violent, the special anti-terrorist unit GSG 9 came into action. Of arrests is unknown.

Last week there were also raids on Germany in an action directed against a group of Chechens. Who was suspected of financing terrorism in Syria. There is then no one arrested.