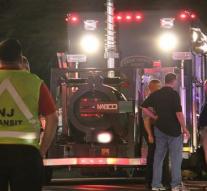 - "The FBI's early Monday morning in the neighborhood of Elizabeth in New Jersey engaged in a raid after five explosive devices were found near a railway station. It is unclear whether there are people arrested."

"The explosives were found in a backpack. One of the bombs exploded when an FBI robot examined the explosive."

"According to reports from The New York Times were both bombs filled with materials that were to cause as much suffering and damage, such as small pieces of metal."