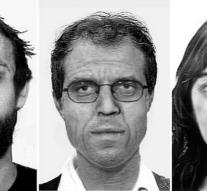 - Three fugitive former members of the Red Army Faction (RAF) are possible after a raid on an armored car in the German state of Lower Saxony. The authorities at least a lot of similarities with previous robberies that were committed by the three previous years.

Suspects Ernst-Volker Staub (61), Burkhard Garweg (47) and Daniela Klette (57) have been around since the early 90s fugitive. They were in the 80's and 90 members of the far-left RAF and would have been involved in bomb attacks on a prison under construction in 1993. In recent years, they committed according to the police at least eight robberies.

The robbery of the weekend was committed in Cremlingen, near Braunschweig. The perpetrators were armed with an automatic rifle and anti-tank weapon. They threatened the driver and his co-driver and shots in the air. Eventually she managed to escape with a booty of unknown size.