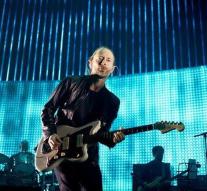 tel aviv - With a heavy middle finger, Radiohead's singer clearly made his displeasure to the public in Glasgow, some of which waved with Palestinian flags last week. 'Klotelui', he still mumbled through the microphone.

The popular British band is heavily pressured to quit his concert in Israel this week. Flyers were also distributed during a recent performance in the Netherlands. The action is led by a group of artists who enlist for a cultural boycott of Israel. Vermaak film director Ken Loach: 'Radiohead has to decide whether it is on the side of the oppressed or the oppressors. The choice is simple. '

The choice is also simple, singer Thom Yorke from Radiohead finds. 'Action in a country is not the same as the government supports. We do not support Trump as Netanyahu, but we are still performing in America. Music, art and science are about building, not destroying bridges. 'What's also playing: The band's guitarist is married to an Israeli.

Any renowned singer who announces an appearance in Israel may expect a letter from the Boycott Group- led by Roger Waters of Pink Floyd. The message: Israel is an apartheid state and must therefore be avoided. However, they are becoming less successful. The one after the big name comes to the Jewish state, often tempted by a big bag of money.

At the same time, a boycott action against Waters was launched: 'We do not need no Roger Waters,' according to a text from one of the best known hits of Pink Floyd.

For the Israeli music lover, it's a good year, with performances by Aerosmith, Justin Bieber and Britney Spears. And this weekend, the old rockers of Guns' n Roses perform. Those with another problem: As a gift to the fans, they decided to start an hour earlier. What does mean, however, that many religious visitors can not be on time because of the Sabbath.