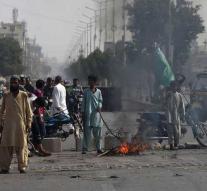 islamabad - Radical Muslims in Pakistan, who have been protesting for days against the release of Asia Bibi, have suspended their actions because they have concluded an 'agreement' with the government. The government confirmed that there is an agreement.

The demonstrators are fierce because the Christian Bibi was acquitted by blasphemy on Wednesday by the Supreme Court.