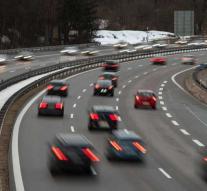 berlin - The German government does not want to know anything about a speed limit on the Autobahn. That is what a spokesman of Chancellor Angela Merkel says in response to increasing actions from the environmental movement.

'The government does not intend to introduce a general speed limit on the German motorways', according to the spokesman. 'There are more intelligent ways to do something about speed than a general limit. 'There is already a speed limit on certain German routes.